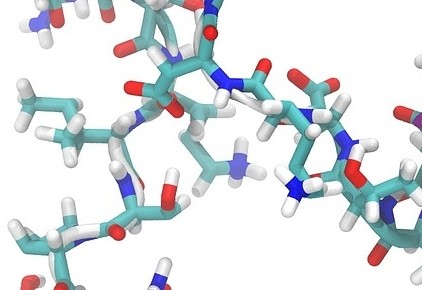 Bacterial infections present a significant global public health problem, due to the emergence of antimicrobial drug-resistant strains [1].   Even “heavy-duty” antibiotics, reserved for the treatment of persistent, drug-resistant bacterial infections are losing their potency, evidenced by the appearance of vancomycin-resistant Staphylococcus aureus, methicillin-resistant Staphylococcus epidermis, ampicillin-resistant and carbapenemase-resistant Escherichia coli strains [2].   This is due in part to virulence factors that bacteria have evolved as a survival mechanism against antibiotics and host innate immunity [3].  While prevention is always better than cure, the development of novel antibacterial drugs, such as synthetic venom antimicrobial peptides (AMPs), is a positive step towards overcoming antimicrobial drug resistance.

AMPs are an important constituent of animal venoms, and are essential mediators of innate immunity in many different organisms [6].  AMPs have been classified according to their source and peptide family, biological activity, peptide characteristics, type of chemical modification, 3-D structure, binding targets and mechanism of action [3]. AMPs exhibit diverse modes of action against many different types of pathogens, including Gram-positive and Gram–negative bacteria.   Most AMPs are between 12-100 amino acid residues in length, carry a net positive charge and are amphipathic.  They have been further classified into four main groups, based on their structure and composition, namely: alpha-helix peptides, beta-sheet peptides, mixed structure peptides and specific amino acid-rich peptides [2].

AMPs alter the organization of the target cell membrane and induce depolarization through electrostatic and hydrophobic interactions with negatively charged lipids.  Once the cell membrane is breached, AMPs may enter the cell where they target DNA, enzymes and cellular structures that are required for cell wall, nucleic acid and protein biosynthesis [3].  However, not all pathogens are susceptible to the actions of AMPs [7].

A feature of venom-derived AMPs is their tendency to cause hemolysis and cytoxicity in cultured mammalian cells [2, 6].  Consequently, in their native state, venom AMPs are of limited therapeutic value to humans.  The search for synthetic analogues of venom AMPs has given rise to the new field of “venomics”, which integrates genomic, transcriptomic, proteomic, bioinformatic and functional analyses of venom peptides [5].  It has also inspired efforts to bioengineer synthetic derivatives of native AMPs that simultaneously exhibit target specificity and bactericidal activity, without inducing hemolysis and cytotoxicity in humans [6, 8].  Table 1 compares the amino acid sequences and the microbicidal, cytotoxic and therapeutic indices of some native scorpion AMPs and their synthetic analogues that are under consideration for clinical trials.

Table 1 – Native and engineered AMPs.  Native AMPs were isolated from the scorpion Urodacus yaschenkoi.  All AMPs were C-terminally amidated.  Data averaged from at least 3 independent expts (n>3);
MIC: Antimicrobial activity;  EC50: The AMP concn that reduces cell viability by 50% in the baby hamster kidney cell line, BHK-21;  HC50: The AMP concn causing 50% hemolysis in pig erythrocytes.  n.c. (100): not convergent at 100 μM;  Column 3: added or substituted amino acid residues are shown in bold type;  Column 5: the dash (-) presumably denotes that the value was beyond the threshold level of detection [adapted from Ref. 6].

Many variables govern the therapeutic potential of AMPs.  The following considerations are designed to assist with peptide design, synthesis and experimental validation:

2.  It is important to design assays of synthetic AMP bioactivity that will confirm whether the peptide is bacteriostatic or is bactericidal.

4.  An increase in net positive charge and the introduction of bulky side chains may increase microbial target specificity.

4.  Amino acid substitutions/additions that are designed to increase microbial target specificity may or may not reduce human hemolytic activity and/or cytotoxicity, and vice versa.

5.  Increasing the net positive charge distribution of amphipathic helices can increase the potency of AMPs, but only if the charge is concentrated at the end of the peptide rather than throughout the sequence.

6.  The hemolytic effect of AMPs may depend more on the stereochemistry of the residues than the nature of the substitution (i.e. L- to D-substitutions may offer a better strategy to reduce hemolytic activity) [2, 6].

Thus, venomics and protein biosynthetic platforms together, have the potential to enable synthetic analogues of venom AMPs to be designed and manufactured, that are target specific, exhibit effective bactericidal activity, and are clinically safe.