The esiCRISPR Kit applies the CRISPR/Cas9 technology to generate knockouts or knock-ins. For knockouts, no additional components are required. For knock-ins, which are based on homology-directed repair, the user must simply add a DNA fragment with homology arms.

The main components of the esiCRISPR Kit are
• either Cas9-NLS nuclease (esiCRISPR Kit-wt) or Cas9-NLS-Nickase (esiCRISPR Kit-Nickase),
• custom-made guide (g)RNAs to target the gene-of-interest and
• CRISPRfection (transfection reagent).
The Cas9-NLS protein and the gRNA are incubated to form an RNP. Then CRISPRfection is added, which coats the RNP and enables its transfection into cells of choice. The cells that took up the RNP are symbolized by a red dot in the black nucleus. About 48 to 72 h later, the cells are screened for the desired mutation.

The Cas9-NLS protein is loaded with the gRNA to form a ribonucleoprotein (RNP). The RNPs are then incubated with the transfection reagent CRISPRfection for cell delivery.

Transfecting cells with RNPs is less toxic to the cells, leads to fewer off-target effects and yields higher insertion/deletion (indel) frequencies than transfecting plasmids or mRNA encoding the Cas9 protein.

The esiCRISPR Kit contains NoTarget gRNA as a negative control, and EGFP gRNA as a positive control. Also, all reagents are provided to allow the researcher to confirm the performance of the Cas9-NLS protein and the gRNA in vitro, and more importantly, to assess the success rate of the desired gene modifications by analyzing PCR products amplified from DNA of transfected cells. (Reagents for PCR are not included). A detailed manual describes the experimental steps. The esiCRISPR Kit is suitable for most adherent human and animal cell lines.

The esiCRISPR Kit-wt uses Cas9-NLS to generate a double-strand break in the DNA, specified by the targeting sequence of the custom gRNA. The benefit of this kit is the simplicity of just one gRNA.

If you opt for the esiCRISPR Kit-Nickase, you benefit from fewer off-targets. Two gRNAs will be supplied, which target your desired DNA locus on opposite strands in close vicinity, because the Cas9-NLS-Nickase only breaks one DNA strand. The requirement of two gRNA-mediated nicks nearby to cause a double-strand break is the reason for the increased target specificity of the esiCRISPR Kit-Nickase.

Hier finden Sie Artikel und Literaturzitate, in denen die Autoren auf die hohe Qualität dieses Genaxxonprodukts vertrauen.
Listed below are articles and references, in which the authors trust in the high quality of this Genaxxon product. 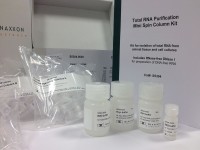