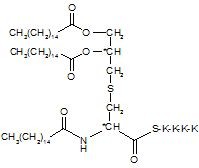 The C-terminal COOH and the NH2 groups in the side chains of the four lysines are available for modification but can not be addressed specifically. Conjugation will lead to a mixture of products. If a specific conjugation to e.g. the side chain of the C-terminal lysine is required, please inquire for custom specific lipopeptide synthesis. Dependent on the compound which should be conjugated we might be able to offer it also from stock (e.g. biotinylation or dye labelled lipopeptides (P2207 >, P2209 >, P2211 >).

Specifications:
Lipopeptides are very hydrophobic peptides. For this reason it is most often not possible to purify them by HPLC and to give reliable purity values (in %) for our standard lipopeptides.
Appearance: white, fluffy powder
N-Palmitoyl-S-[2,3-bis(palmitoyloxy)-(2RS)-propyl]-[R]-cysteinyl-[S]-seryl-[S]-lysyl-[S]-lysyl-[S]-lysyl-[S]-lysine x 3 CF3COOH
C81H156N10O13S x 3HCl
MW = 1509.6 g/mol x 109.5 g/mol