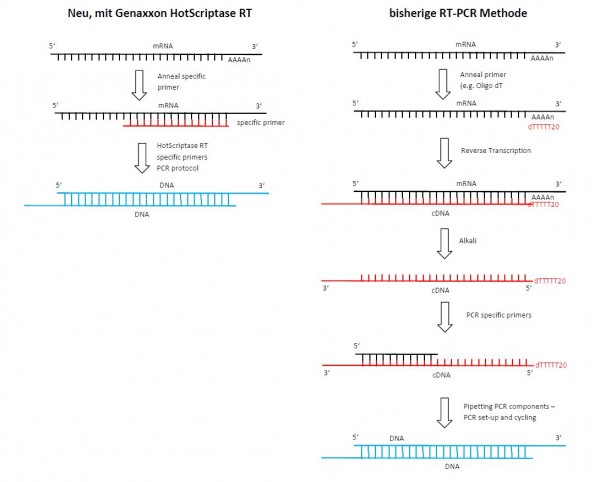 Why quantitative or real-time RT-PCR?

Over the last decade detection of PCR products based on real-time PCR became a widespread method due to the development of better instrumentation and chemistry enabling detection of PCR products on a real-time basis. Improved techniques and lower prices led to a widespread adoption of real-time RT-PCR as the method of choice for quantitating changes in gene expression. With the increasing numbers of labs and core facilities acquiring the instrumentation required for real-time analysis, this technique is becoming the dominant RT-PCR-based quantitation technique. Furthermore, real-time RT-PCR has become the preferred method for validating results obtained from array analyses and other techniques that evaluate gene expression changes on a global scale.

To understand the following explanations, a review of PCR fundamentals is necessary. At the start of a PCR reaction, reagents are in excess, template and product are at low enough concentrations that product renaturation does not compete with primer binding, and amplification proceeds at a constant, exponential rate. The point at which the reaction rate ceases to be exponential and enters a linear phase of amplification is extremely variable, but it appears to be primarily due to product renaturation competing with primer binding (since adding more reagents or enzyme has little effect). At some later cycle the amplification rate drops to near zero (plateaus), and little more product is made.

For accuracy and precision reasons, it is necessary to collect quantitative data at a point in which every sample is in the exponential (geometric) phase of amplification (since it is only in this phase that amplification is extremely reproducible and data collection therefore very precise). Analysis of reactions during exponential phase at a given cycle number should theoretically provide several orders of magnitude of dynamic range.

Currently four different real-time PCR approaches are applied, TaqMan® (Applied Biosystems, Foster City, CA, USA), Molecular Beacons, Scorpions® and SYBR® Green (Molecular Probes), are available for real-time PCR. All these four methods allow detection of PCR products via the generation of a fluorescent signal. TaqMan probes, Molecular Beacons and Scorpions depend on Förster Resonance Energy Transfer (FRET) > to generate the fluorescence signal via the coupling of a fluorogenic dye molecule and a quencher moeity to the same or different oligonucleotide substrates. SYBR® Green is a fluorogenic dye that exhibits little fluorescence when in solution, but emits a strong fluorescent signal upon binding to double-stranded DNA.

TaqMan® probes need a 5'-nuclease activity of the DNA polymerase used for PCR to hydrolyze an oligonucleotide that is hybridized to the target amplicon. TaqMan® probes are oligonucleotides that have a fluorescent reporter dye attached to the 5' end and a quencher moeity coupled to the 3' end. These probes are designed to hybridize to an internal region of a PCR product. In the not degradet state, the proximity of the fluorophore and the quenching part of the molecule prevents the detection of fluorescent signal from the probe (FRET effect). During PCR, when the polymerase replicates a template on which a TaqMan® probe is bound, the 5'-nuclease activity of the polymerase cleaves the probe. This decouples the fluorescent and quenching dyes and FRET no longer occurs. Thus, fluorescence increases in each cycle, proportional to the amount of probe cleavage

Well-designed TaqMan® probes require very little optimization. In addition, they can be used for multiplex assays by designing each probe with a spectrally unique fluorophore/quenching pair. However, TaqMan® probes can be expensive to synthesize, with a separate probe needed for each mRNA target being analyzed.

Like TaqMan® probes, Molecular Beacons also use FRET to detect and quantitate the synthesized PCR product via a fluor coupled to the 5' end and a quench attached to the 3' end of an oligonucleotide substrate. Unlike TaqMan® probes, Molecular Beacons are designed to remain intact during the amplification reaction, and must rebind to target in every cycle for signal measurement. Molecular Beacons form a stem-loop structure when free in solution. Thus, the close proximity of the fluorophore and quenching part of the molecule prevents the probe from fluorescing. When a Molecular Beacon hybridizes to a target, the fluorescent dye and quencher are separated, FRET does not occur, and the fluorescent dye emits light upon irradiation.

With Scorpion® probes, sequence-specific priming and PCR product detection is achieved using a single oligonucleotide. The Scorpion® probe maintains a stem-loop configuration in the unhybridized state. The fluorophore is attached to the 5' end and is quenched by a moiety coupled to the 3' end. The 3' portion of the stem also contains sequence that is complementary to the extension product of the primer. This sequence is linked to the 5' end of a specific primer via a non-amplifiable monomer. After extension of the Scorpion primer, the specific probe sequence is able to bind to its complement within the extended amplicon thus opening up the hairpin loop. This prevents the fluorescence from being quenched and a signal is observed.

SYBR® Green provides the simplest and most economical format for detecting and quantitating PCR products in real-time reactions. SYBR® Green binds double-stranded DNA, and upon excitation emits light. Thus, as double stranded DNA accumulates, fluorescence increases. The advantages of SYBR® Green are that it is inexpensive, easy to use, and sensitive. The disadvantage is that SYBR® Green will bind to any double-stranded DNA in the reaction, including primer-dimers and other non-specific reaction products, which results in an overestimation of the target concentration. For single PCR product reactions with well designed primers, SYBR® Green can work extremely well, with spurious non-specific background only showing up in very late cycles.

SYBR® Green is the most economical choice for real-time PCR product detection. Since the dye binds to double-stranded DNA, there is no need to design a probe for any particular target being analyzed. However, detection by SYBR® Green requires extensive optimization. Since the dye cannot distinguish between specific and non-specific product accumulated during PCR, follow up assays are needed to validate results.

TaqMan® probes, Molecular Beacons and Scorpions® allow multiple DNA species to be measured in the same sample (multiplex PCR) in parallel, since fluorescent dyes with different emission spectra may be attached to the different probes. Multiplex PCR allows internal controls to be co-amplified and permits allele discrimination in single-tube, homogeneous assays. These hybridization probes afford a level of discrimination impossible to obtain with SYBR® Green, since they will only hybridize to true targets in a PCR and not to primer-dimers or other spurious products. The Genaxxon Multiplex PCR 2-time Mastermix (M3005) > is optimal suited for this PCR approach.

Two strategies are commonly employed to quantify the results obtained by real-time RT-PCR; the standard curve method and the comparative threshold method.

In this method, a standard curve is first constructed from an RNA of known concentration. This curve is then used as a reference standard for extrapolating quantitative information for mRNA targets of unknown concentrations. Though RNA standards can be used, their stability can be a source of variability in the final analyses. In addition, using RNA standards would involve the construction of cDNA plasmids that have to be in vitro transcribed into the RNA standards and accurately quantitated, a time-consuming process. However, the use of absolutely quantitated RNA standards will help generate absolute copy number data.

In addition to RNA, other nucleic acid samples can be used to construct the standard curve, including purified plasmid dsDNA, in vitro generated ssDNA or any cDNA sample expressing the target gene. Spectrophotometric measurements at 260 nm can be used to assess the concentration of these DNAs, which can then be converted to a copy number value based on the molecular weight of the sample used. cDNA plasmids are the preferred standards for standard curve quantitation. However, since cDNA plasmids will not control for variations in the efficiency of the reverse transcription step, this method will only yield information on relative changes in mRNA expression. This, and variation introduced due to variable RNA inputs, can be corrected by normalization to a housekeeping gene.

For the ΔΔCt calculation to be valid, the amplification efficiencies of the target and the endogenous reference must be approximately equal. This can be established by looking at how ΔCt varies with template dilution. If the plot of cDNA dilution versus delta Ct is close to zero, it implies that the efficiencies of the target and housekeeping genes are very similar. If a housekeeping gene cannot be found whose amplification efficiency is similar to the target, then the standard curve method is preferred.

Zero-Step >, versus One-Step, versus Two-Step RT-PCR

The oldest approach to quantify RNA is the so called Two-Step PCR. It begins with the reverse transcription of either total RNA or poly(A)+ RNA into cDNA using a reverse transcriptase. Following first-strand synthesis, the cDNA is transferred to a separate tube for the PCR step. Two-Step RT-PCR is useful for detecting multiple messages from a single RNA sample. You’ll get greater flexibility when choosing primers and polymerase than with Zero-Step or One-step RT-PCR systems. When performing Two-Step RT-PCR, you have the option of using either oligo(dT) >, random hexamer >, or gene-specific primers, and then PCR is performed with either SuperHot Taq DNA Polymerase >, ReproHot Taq DNA Polymerase >, or your choice of DNA Polymerase.

The Genaxxon HotScriptase RT Mastermix > does not even need an isothermic transcription step anymore. Transcription and amplification is done in one single PCR-protocoll thus needing less than 1 hour to get a real-time PCR signal from RNA.

Even more easy and straight forward is the use of our HotScriptase RT Cell Mastermix >, which enables RNA transcription and cDNA amplification from cells without an isolation and purification step for RNA. Not even a cell lysis step as with the Cells-to-cDNA™ II Kit from Ambion (ThermoFisher) is needed anymore.

End-point RT-PCR can be used to measure changes in expression levels using three different methods: relative, competitive and comparative. The most commonly used procedures for quantitating end-point RT-PCR results rely on detecting a fluorescent dye such as ethidium bromide / GelRed® >, or quantitation of P32-labeled PCR product by a phosphorimager or, to a lesser extent, by scintillation counting.

Relative quantitation compares transcript abundance across multiple samples, using a co-amplified internal control for sample normalization. Results are expressed as ratios of the gene-specific signal to the internal control signal. This yields a corrected relative value for the gene-specific product in each sample. These values may be compared between samples for an estimate of the relative expression of target RNA in the samples.

Absolute quantitation, using competitive RT-PCR, measures the absolute amount (e.g., 5.3 x 105 copies) of a specific mRNA sequence in a sample. Dilutions of a synthetic RNA (identical in sequence, but slightly shorter than the endogenous target) are added to sample RNA replicates and are co-amplified with the endogenous target. The PCR product from the endogenous transcript is then compared to the concentration curve created by the synthetic "competitor RNA."

Comparative RT-PCR mimics competitive RT-PCR in that target message from each RNA sample competes for amplification reagents within a single reaction, making the technique reliably quantitative. Because the cDNA from both samples have the same PCR primer binding site, one sample acts as a competitor for the other, making it unnecessary to synthesize a competitor RNA sequence.