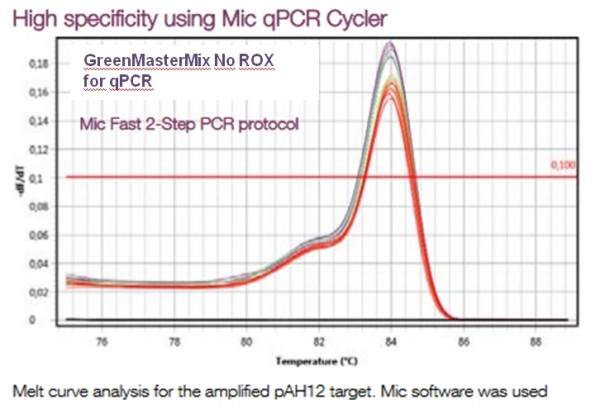 Standard PCR amplification once required often laborious DNA extraction, purification, end-stage processing and sample set-ups, using relatively primitive instruments and complex protocols. The notion that 35 cycles of PCR amplification could be completed in under 25 minutes, without compromising precision or accuracy, was considered a distant prospect.

The rapid co-evolution of instrumentation, plastic ware, reagents and methodologies, makes it possible to obtain a PCR result within 1 hour. However, this so-called „fast PCR“ is conditional upon optimization of all the parameters, in the desired conditions, to achieve reproducible, accurate and efficient results.

1. Instrumentation
All thermal cyclers are designed to amplify DNA, and many can be adapted for other applications including DNA cloning, sequencing and genetic testing1. Multiple instrument-specific factors, including the actual instrument ramp rates, sample temperature measurement, and how the thermal cycler ensures accurate overshoot calculation, contribute to the integrity and performance of PCR assays2.

The Magnetic Induction Cycler (MIC), developed by bio molecular systems, is one of the most advanced instruments developed to date.  Unlike the Peltier block-based system, the MIC cycler offers rapid cycling times (< 25 mins) and superior temperature uniformity (± 0.05C), and it has dispensed with the need for thermal insulation, as the rotor is the only component that is heated3. When used with realtime master mixes, such as those developed by Genaxxon bioscience, it is possible to generate short amplicons in 35 cycles in under 25 minutes. MIC technology does not require the use of reference fluorescence dyes. Therefore, Genaxxon bioscience‘s GreenMastermix (2X) > and ProbeMastermix (2X) > are ideally suited for the MIC qPCR-cycler (Graph 1). Master mixes from Genaxxon contain all necessary components for fast, reliable and quantifiable qPCR results.  Indulge yourself in an intriguing study of fast Cycling Real-Time PCR Conditions using Genaxxon Master Mixes ! Additional improvements in instrumentation design:
-    Steeper temperature ramping based on better heating and cooling methods (Peltier elements instead of water cooling).
-    Improved temperature transition from the cycler block to PCR tubes as a result of more sophisticated product engineering; or by usage of materials, such as silver or gold blocks, that confer efficient temperature transition. Such improvements were introduced over time by the manufacturers of thermal cyclers. The first instruments from Perkin Elmer (TC-1 and TC-2) for example, had ramping rates in the range of 1 minute to 2 minutes. The next generation cycler (GeneAmp 9600) cut this time down to 30 sec.

The following table illustrates how refinements in thermal cycler design in the last 30 years have led to increased efficiencies in cycling times:

Simply speeding the ramp and the protocol may not be enough to obtain the results you need. Block conformity and appropriate matching of instrument with PCR reagents are also critical.

“A key component of overall protocol run time is the time to reach target temperature, which is determined by the average ramp rate and the time for the sample block to reach thermal uniformity,” (Hilary Srere, Marketing Manager for amplification in the Gene Expression Division at Bio-Rad Laboratories). This parameter was foremost in the development of MIC technology, which has eliminated all problems associated with ramping and position-dependent temperature variability.

2. Plastic ware
Not all plastics are created equal. PCR tubes and plates with thinner walls, (e.g., thin- walled PCR tubes from Genaxxon >), allow much faster temperature transition from the heating block to the PCR reaction mixture, but we recommend that you screen different plastic samples in parallel, to determine the relative efficiencies with which the block and the sample temperatures reach equilibrium. Other considerations include: the reaction volume and composition, and whether the heat transmission from the block, through the plastic ware to the samples, is position-dependent.

3. Reagents
Some scientists hesitate to replace tried-and-true reagents with untested alternatives that promise to yield results with greater speed and accuracy. Others decline because of the prohibitive costs incurred with QA testing, and replacement of familiar with unfamiliar brands within, for example, some Government- and privately-owned analytical laboratories.

This reluctance is compounded further by the finding that some fast PCR kits do not perform well with long or difficult amplifications.

All the technical improvements in instrumentation and consumables made it necessary to have DNA polymerases at hand that are able to cope with the rapid temperature changes. Since wild-type enzymes may increase the chance of failure or poor performance, increasing numbers of suppliers of realtime PCR master mixes now offer kits that contain modified DNA polymerases that are equipped to handle very fast, respective short cycling times, at least for small amplicons in the range of up to 300bp, without reducing performance or accuracy.

4. Methods
Since its inception in the 1980s, PCR technology has evolved to the point where cycling times have been progressively reduced, target specificity and accuracy have been greatly enhanced and the risks of false priming and false positive/negative data have been decreased significantly.

Still the kinetics of the PCR reaction may result in poor PCR results if fast PCR reagents are used in conjunction with the newer fast thermocyclers. PCR and especially qPCR are prone to failure when cycling parameters are not optimized and the reaction proceeds too quickly. This presents a challenge for determining which protocol is best for a specific assay on a particular instrument.

Although fast PCR offers clear advantages, even with fast PCR reagents that do not require a specialized thermal cycler, many researchers still resist the opportunity to try a new method, despite assurances of considerable time savings and improved accuracy.

So, how can cycling times be reduced further without compromising accuracy?  Some commonly-adopted strategies include:

-    Protocol changes that shave time off of most steps: after having implemented a PCR, very often it will be possible to reduce the time of the PCR-steps in an optimized PCR protocol.
-    Combining the annealing step and the extension step, thus removing at least 2 ramping steps. 2-step PCR protocols are very common in the meantime and are used successfully.
-    Multiplex PCR: performing PCR of different amplicons in one PCR event.
-    Reducing reverse transcription and amplification to a 1-step procedure:  the development of Genaxxon bioscience‘s HotScriptase kit enables RT-PCR without an isothermal RNA transcription step. Our innovative HotScriptase RT has proven to be an extremely thermo- and inhibitor stable DNA polymerase with reverse transcriptase activity which does not need purified RNA for transcription and amplification, hence has been used to develop our Genaxx1Step RT-qPCR SARS-CoV-2 Probe Kit. Our kit is comparable to that of DiaSorin (Lilaison® MDX), but can be used on any real-time PCR device.

In some thermocyclers the ramping speed differs for 'slow' and 'fast' PCR programs.  Trey Foskett, co-founder of Kapa Biosystems, recommends the fast ramping speed, as it saves a bit of time without compromising accuracy.

5. Trouble shooting
You should always optimize your own PCR mix and program, taking into account firstly, the manufacturers’ recommendations, before deciding whether to follow or amend their suggestions.

In some thermocyclers the ramping speed differs for 'slow' and 'fast' PCR programs. Just do not switch between the two, for any given PCR protocol.

A major challenge in the development of fast PCR, is determining which applications are most amenable to conversion to fast PCR assays. Often fast PCR protocols tend to compromise one or more of the reaction parameters necessary for efficient amplification. For example, insufficient DNA denaturing or primer annealing can have dramatic effects on PCR performance, causing reaction failures for assays already operating on the edge of success.
While advantages promised by fast PCR are alluring, the price tag of new technology is prohibitive for some researchers.

6. Fast PCR on a budget
Norbert Tröndle, CEO of Genaxxon bioscience, believes that the adoption rates of fast PCR will likely increase, but that they will co-exist with current technologies for some time, for the reasons stated above. Regardless of their format, PCR technologies will always have their roots in the first principles of nucleic acid reverse transcription and replication.

Even without state-of-the-art instruments, it is still possible to accelerate your research with new enzymes and/or reagent mixes as the following strategies illustrate:

-    Use the MIC instrument together with Genaxxon’s established realtime PCR reagents >.
-    Try Genaxxon bioscience’s HotScriptase RT-PCR kit >, which provides an improved and faster protocol for RT-PCR and bypasses the need for an isothermal RNA transcription step.
-    Accelerate single nucleotide polymorphism (SNP) detection, using Genaxxon’s SNP Pol DNA Polymerase >.  This enzyme will only amplify DNA if the 3‘-end of the primer and the target DNA-sequence match perfectly.
-    Amplify DNA directly from food of animal origin, using Genaxxon’s recently-released IdentityTaq 2X master mix >. As prior DNA isolation and DNA purification are not required, this method saves a lot of time. The overall result is impressive: after a short lysis step your final results will be ready in less than one hour, inclusive of gel electrophoresis! The IdentityTaq 2X master mix can be requested with control DNA and primer pairs for DNA sequences from fresh or prepared food containing beef, pork, lamb, poultry, turkey, horse, cat, dog, mouse, rat, salmon, trout, or codfish, and for food prepared for human or animal consumption such as hamburgers, hot dogs, doner kebabs, lasagna, pet food or other products.
Take heart—it is possible to speed your research with new enzymes and/or reagent mixes.