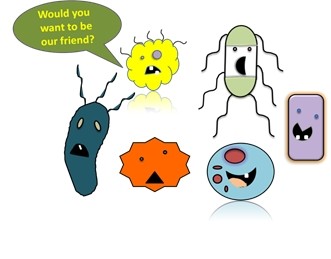 We are surrounded by microbes or microorganisms but not all of them are harmful.  Actually some are beneficial for us and harmful microbes are called pathogens. Imbalance in gut microbiota (dysbiosis) can lead to various diseases, studies have found. Read more>

The pathogens we would talk about here are viruses, bacterias and fungi. They differ in size, shape, function, genetic makeup and their effect on hosts. These pathogens have evolved just like every other organism in the world to adapt and survive. This is why they can escape the body’s immune responses and destroy the body homeostasis completely. This leads to disease in the hosts. How selfish, isn’t it? They can be transmitted via bodily fluids, air droplets, feces, sexual encounter, etc.

They are protein coated RNA or DNA that cannot replicate on its own and which is why considered to be “not alive”. They particularly need host cell machinery to replicate which is why once the hosts gets affected, they inturn affect others via various routes of transmission. Once inside the cells, they exploit the host cells as slaves to produce materials of their own interest. Then they make several copies of themselves and in the end are released by the cells, damaging them entirely. Some viruses such as human papillomavirus (HPV) > and Epstein-Barr virus (EBV) > have the ability to make the host cells cancerous. In case of COVID-19, hosts are various animals along with humans and the route of transmission is via airborne droplets. This is why we have been asked to avoid social contacts. Some viruses remain dormant for quite some time after having infected their hosts and this is the reason, a person not showing the symptoms could also be a carrier.  For example in case of HIV, COVID-19, etc, the person is already infected for quite some time before the symptoms appear. The only way to eradicate them is through Anti-viral drugs and vaccines. Read about SARS- CoV2 here!

Viruses are most commonly classified using Baltimore classification. Have a look!

Visit https://www.genaxxon.com/shop/en/  and explore our SARS-CoV-2 related products > and visit our peptide library >.

The second notorious beings on our list are the bacterias. These are single celled microbes which come in various shapes and sizes. They are found in every climate and every environment, including our bodies. Our gut microbiota (just a fancy term for gut microbes) is very useful for the body and 2/3 rd of it is different for each individual. Fascinating, right? On the contrary, the other notorious ones are harmful to us and are termed as pathogenic bacterias. Usually our body can fight bacterias but not if it’s immune system is compromised, like in the case of viral infections. Therefore the chances of bacterial infections are high if you have viral infections. This is the reason why patients with HIV die of other diseases. Bacterial diseases can be controlled by antibiotics. Genaxxon has kits for DNA and RNA purification from bacteria >.

Fungi are plural for a fungus which is often multicellular but could also be single celled, for example Saccharomyces cerevisiae (baker's yeast) and Candida species which causes common fungal infection are examples of unicellular fungi. Fun fact: All mushrooms are fungi, but not all fungi are mushrooms! They reproduce either via spores or budding. Fungal infections occur if the spores are inhaled which may lead to systemic infections. Usually these infections are fought by good bacterias present in our mouth, intestine and other body parts. Just like bacterias, they are also found almost everywhere. They have a thick cell wall which could make them harder to kill but various forms of antifungal medication can kill them. Genaxxon supplies Amphotericin B > for bacterial cell culture to avoid fungal growth.

PHOENIXDX® 2019-NCOV
€475.00 *
Amphotericin B Powder
From €53.81 *
RNA Purification from Bacteria and Yeast Kit
From €39.79 *
This website uses cookies to ensure you get the best experience on our website.
Accept