Life is full of confusions, don´t let PCR be one of them!!

PCR or polymerase chain reaction was developed not very long ago in the 1980s. It is a powerful molecular biology technique used for making replicas of DNA template in an exponential manner. DNA amplification (making a lot of identical copies of the DNA) starts with replication of DNA which is mediated by polymerases (a type of protein). DNA is made up of nucleotides (A-Adenine, T-thymine, G-Guanine, and C-cytosine; also known as the building blocks of DNA) and a pair of three nucleotides is known as a codon, for example ATGGCCTAATGCAT is a DNA sequence (Part of DNA which need to be amplified, ATG at the start of the sequence is a codon, similarly the next three GCC is the next codon.Don´t forget to check out our star RedMastermix (2X) - PCR master mix with red dye!

Once upon a time the notion that 35 cycles of PCR amplification could be completed in under 25 minutes, without compromising precision or accuracy, was considered a distant prospect. But not any more! With fast PCR, which is an interplay of instruments, plasticwares, reagents and methods, it is possible.

Nowdays,suppliers endeavor to provide kits that can be adapted to existing systems but is it really possible to achieve 100% compatibility? Almost never. Find out how you can optimise various PCR parameters to obtain desired results, here >

DNA replication starts at start codon when the DNA polymerase binds to the origin of replication. For replication to continue the two strands of DNA templates must be separated (template melting) and single strands must be made available for primers to bind. This process is called denaturation of the DNA strand. This takes place at very high temperature (94oC-96oC). The two most widely used polymerases in the in-vitro DNA amplification are Taq polymerase and Pfu DNA polymerase due to being heat resistant.

Polymerases act by adding nucleotides to the new strand by adding the new nucleotides to the existing –OH group of the previously incorporated nucleotides. DNA polymerase cannot incorporate a new nucleotide without a previous nucleotide with a free –OH being present. This is the reason why primers are used in-vitro. In human cells these primers are made by an enzyme called primase which makes RNA primers are human have no innate ability to synthesize DNA primers. Therefore these DNA primers have to be made synthetically in a lab as per DNA template in question. Primers anneal to the single stranded DNA at temperature around 68oC.

Once the primers are annealed to the DNA strands; DNA polymerase can attach to the strands and starts incorporating the nucleotides by referring to the parent strand. A is incorporated if T is present on parent strand by two hydrogen bonds and G is incorporated if C is present on parent strand by three hydrogen bonds. This goes on until the polymerase comes across the stop codon. Then the DNA polymerase detaches itself from the strand and the result is two identical copies of parent DNA. (The 2 in 2n comes from that and n is the no. of cycles you want the PCR to work for you). This step takes place at about 72oC.

This whole process is repeated in every cycle resulting in 2n number of DNA strands. 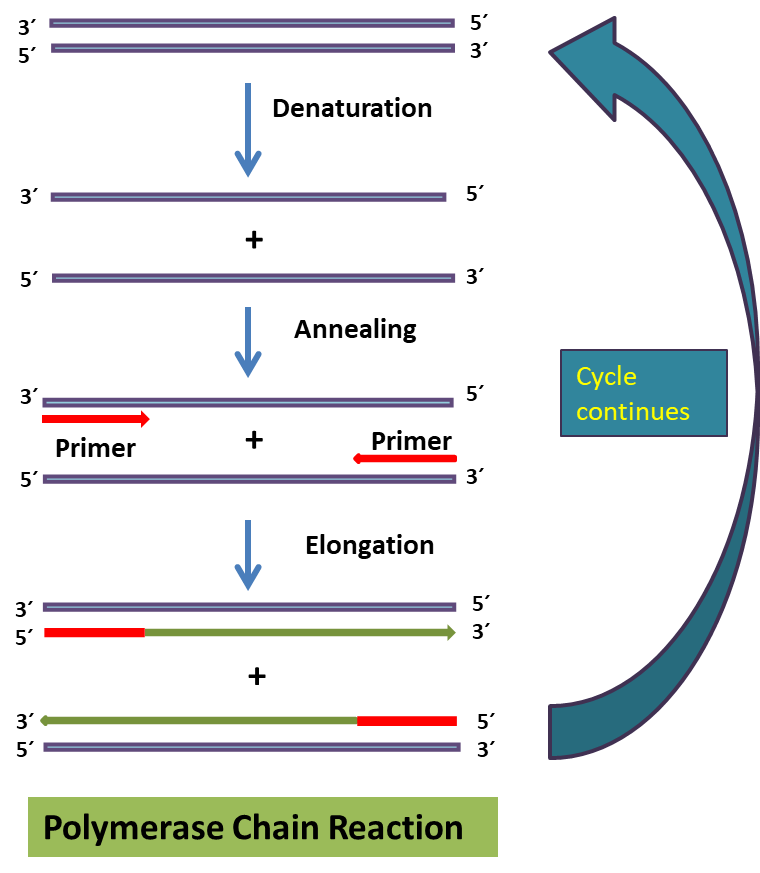 RT-PCR stands for reverse transcription PCR! Check out our website for products related to RT-PCR . This technique uses an enzyme called Reverse transcriptase to convert RNA strand to DNA. The resulting DNA is called cDNA (complementary DNA). Once this cDNA is obtained, it is amplified just like in a classical PCR by DNA polymerase: denaturation, annealing and elongation. It could be two step PCR (tube needs to be changed along with the reagents after the reverse transcription step) or one step PCR (no need for change of tubes in between).

Quantitative PCR more commonly known as qPCR is used for detection, characterization and quantification for various reasons. It does so by measuring the real-time fluorescence signals from the probes attached to the nucleotide which is directly proportional to the quantity of DNA present at each cycle during a PCR. This is why it is also known as realtime PCR. This is particularly useful when the initial amount of target is to be determined for example, what is the effect of a newly developed drug on the gene expression (the quantity of initial mRNA in the sample). RT-qPCR is the technique where qPCR is modified to detect and quantitate RNA by adding a reverse transcriptase step upstream of the qPCR assay to generate cDNA (i.e., RT-qPCR).

Qualitative PCR comes to rescue when the goal is to detect the presence or absence of a certain sequence for example allelic discrimination between wild type and mutant, between different SNPs (Single Nucleotide Polymorphisms) or between different splicing forms. Different fluorophore signals can be used for the different alleles, and the ratio of the two can help determine which one is more abundant than the other.

Sensitivity and specificity of PCR is determined by its ability to generate specific copy sequences of the template in question. This is one of the most challenging parts of 1 step PCR of the time. The conventional Reverse transcriptases were stable only at temperatures 42 to 70 °C. At such low temperatures mispriming of primers is common which results in unspecific products due to the elongation of primers by the enzyme. This needed to be addressed as these non-specific sequences then start to hamper the formation of specific sequences. This issue could be resolved by optimising the temperatures or introducing the hot start polymerase. Hot start enzymes are active only at very high temperatures where the mispriming is almost impossible. This leads to specific primer annealing and gene specific elongation.

One such enzyme used for conventional PCR is obtained from thermus aquaticus, known to us as Taq polymerase which is a thermostable enzyme. It is DNA dependent DNA polymerase and is active at 75–80 °C. Various manufacturers have been able to achieve an improvement in the activity or stability of the enzyme by modifying it till date but as long as there is window for improvement the efforts go on. It is achieved by limiting reagents (via modified primers, modified dNTPs, controlled addition of Mg2+) or Taq DNA polymerase (inactivation, inhibition or late introduction of Taq DNA polymerase) until the high temperatures are used. Our Genaxxon HotStart Taq is an optimized mixture from our Taq DNA polymerase and a monoclonal antibody. Use our SuperHot Taq DNA Polymerase, a superior DNA polymerase for Real Time PCR, Hot-Start PCR, low-copy number PCR, or PCR of difficult templates. Optimal for difficult templates with high GC-content!

Hot start variant of RNA dependent DNA polymerases are a constant topic of research but nothing till date has been found. But this didn´t stop our enthusiastic researchers from revolutionising the PCR. They introduced the ways of modifying the existing Reverse transcriptase to make it more stable at high temperatures by techniques used to for modification of DNA dependent DNA polymerases. One of the widely used methods for obtaining Hot-start reverse transcriptase is to link it to aptamers. Aptamers are highly specific oligonucleotides which bind to the enzyme at low temperatures making it unavailable for elongation. Only when high temperatures are reached the two separate and the PCR continues. Have you tried our Hotscriptase yet?  .Several other obstacles have been taken into account like the longer length of the cDNA formation. This was overcome by modifying the enzyme and removing its RNAse H activity. The Genaxxon M-MuLV Reverse Transcriptase is recommended for synthesis of cDNA from 100 bp up to 10 kb length.

RT-qPCR is of great help not only today but also in future since the viral outbreak lately have mainly been of RNA viruses, namely coronaviruses, Zika virus, Ebola virus etc.

Did you know Genaxxon´s HotScriptase Covid-19 master mix was successfully used by several customers for the detection of corona viruses (SARS-CoV-2, COVID-19). HotScriptase Covid-19 master mix enables the amplification of RNA or DNA target sequences with quick and easy PCR protocols, even without an isothermal reverse transcription step. The light blue color improves the visibility of the mixture during the pipetting steps, especially if white or transparent PCR plates or PCR tubes are used. The HotScriptase RT-qPCR SARS-CoV-2 CDC Probe Assay Kit is a real-time RT-PCR-based detection system for the targets N1 and N2 of the nucleocapsid from the SARS-CoV-2-Corona virus (2019-nCoV), as well as for the control target RNASeP.

For other products related to PCR visit Genaxxon !!!