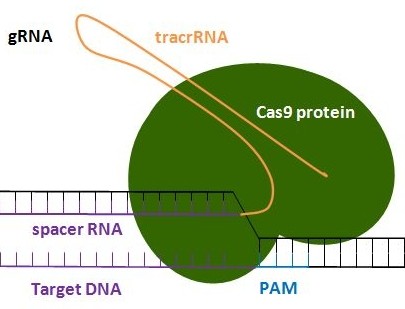 The gene superfamily of clustered regularly interspaced short palindromic repeats (CRISPR) and CRISPR-associated (Cas) nucleases, evolved in archaea and bacteria as a mechanism of acquired host defence against repeated virus transduction and/or plasmid transfection.  To date, several different CRISPR/Cas systems have been isolated and classified according to their molecular structure, substrate specificity and the conditions that support their optimum activity [1-3].

CRISPR/Cas9, a well-studied member of this superfamily, was repurposed as a gene editing tool in eukaryotic experimental models [4-6].  It comprises a single guide RNA (sgRNA) that recognizes its DNA target by Watson-Crick base-pairing, and directs Cas9 endonuclease to a pre-determined target locus, adjacent to a protospacer adjacent motif (PAM), where Cas9 generates site-specific double-strand breaks (DSBs) in the DNA [7]. In eukaryotes, Cas9-induced DSBs can be repaired in either of two ways, i.e.:

(i) Non-homologous end-joining (NHEJ): an efficient, but error-prone mechanism that can introduce insertion/deletion (indel) mutations at the repair site and/or elsewhere in the genome.  NHEJ is suitable for gene inactivation or deletion mutations that do not rely on preservation of the sequences flanking the affected site.

(ii) Homology-directed repair (HDR): the method of choice in mitotically-active cells, when precise genetic modification is required, and a donor template with homology to the sequences flanking the DSB is provided [Dai 2016].  In post-mitotic, CRISPR/Cas9-expressing cells, HDR can be achieved if the DNA template is delivered by an adeno-associated virus (AAV) vector [8].

The simplicity, versatility, cost-effective design, and ease of use of CRISPR/Cas9, make it a popular choice for modelling animal and plant development and disease.  However, there are many potential complications, some of which are listed below, that hinder its widespread application in vivo.  Among the many possible contributing factors, are Cas9-associated off-target DSBs.  Here, we describe some of the methods and resources that are available to predict and detect them.

Even if the most stringent measures have been taken to avoid off-target activity, it is prudent to screen the entire genome for unintended changes, but only after the on-target mutation is confirmed [16].  The reason is, that the monomeric Cas9 nuclease is more prone to off-target effects than the dimeric zinc finger nucleases (ZFNs) and transcription activator-like effector nucleases (TALENs).  This is attributed to its smaller size, its ability to recognize shorter target sequences, and the ability of the gRNA to tolerate a certain number of mismatches [16].   Among several resources that have been developed to identify off-target changes are:

1. Off-target predictive modelling:  These programs are based on sequence similarity, but differ with respect to the search algorithms used, and the search parameters used (i.e.: max. no. of mismatches, permissible PAMs, completeness of search) [17].  Without validation, they have limited predictive power, and may yield high false positive rates [18].

2.  Protocols that detect off-target DSBs at predicted sites (biased detection): Methods that have been developed to detect on-target mutations can also be used for the analysis of off-target changes, provided that the sites are known [16].  The following protocols are examples:

3.4   CIRCLE-Seq (Circularization for In vitro Reporting of CLeavage Effects by Sequencing)

Note - Nuclease concentration within the cell, delivery method (RNP vs plasmid vs integrating virus vs non-integrating virus) and chromatin accessibility, all significantly affect editing outcomes and are generally missed by in vitro off-target assays [18].