With genetic modification against the classical swine fever 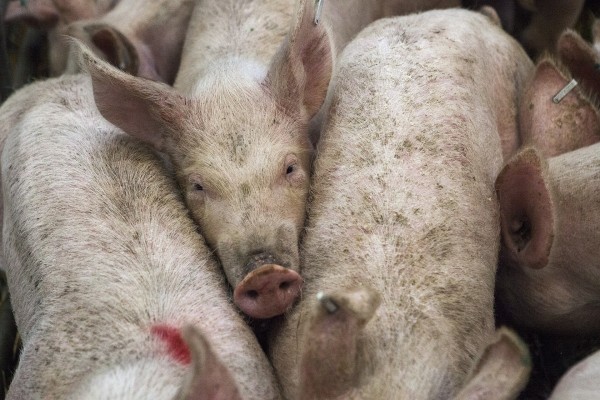 The classic swine fever (CSF) is considered one of the most important animal diseases worldwide. It causes in a disease outbreak high economic damage and losses. Attempts to eradicate it failed so far. The last epidemic outbreak in Germany was in the mid-90s.
CSF is a highly contagious, notifiable viral disease of domestic and wild boars with high mortality rates. This means that Europe-wide strict rules apply in the event of an outbreak of disease. These include the construction of restricted and observation areas. All animals within the restricted area are killed (culling) and the carcasses are eliminated harmlessly. In both zones no more pigs may be brought in or exported. All pig holdings within these zones are excluded from intra-Community trade and trade with third countries.
A prophylactic vaccination of domestic swine against this epizootic disease has been prohibited throughout the EU since the 1990s, mainly because of trade policy considerations.

The CSF is caused by a pestivirus from the family Flaviviruses. It is not transferable to other species or to humans. Wild boars form the most important pathogen reservoir. But the introduction of subclinically infected pigs is a danger as well as the transmission by vectors. These include contaminated equipment and syringes (iatrogenic transmission) and particles attached to clothes. For these reasons optimal stable hygiene is indispensable.

Contagion occurs primarily orally or via the respiratory tract directly from animal to animal. The incubation period is between 2-8 days to over 5 weeks, depending on the virulence of the pathogen. The virus is excreted via faeces, urine, saliva, eye and nasal secretions. The excretion occurs constantly, already a short time after an infection until the death of the animal. Even large numbers of pigs can be fully infected within a week.

The clinical picture of a disease is usually not clear and variable. The acute course of an infection is associated with high fever up to 41° C and inappetence. Central nervous disorders and cyanotic and haemorrhagic symptoms (tendency to bleed) may occur, and respiratory and enterobacterial secondary infections often occur. There are more abortions in the stable. Infected animals usually die within one to two weeks.
There is also a chronic form with weakened symptoms. However, a general lack of symptoms does not rule out infection with CSF. The direct detection is done by immunofluorescence on tissue parts as well as the direct excitation breeding from the blood.

Chinese scientists have succeeded in changing the genetic material of pigs so that they are resistant to the CSF virus. A combination of the CRISPR / Cas9 method > and the RNA interference (RNAi) technology was used. RNAi is a natural post-transcriptional gene silencing mechanism. Antiviral siRNA was thereby introduced into the porcine genome using the CRISPR / Cas9 method. The mutation could be stably transferred to the F1 generation.

First, antiviral siRNA sequences whose expression prevents replication of the KSP virus and small hairpin shRNA expressing targeting vectors were identified. These vectors were then introduced into the pRosa26 locus of porcine fetal fibroblasts with the CRISPR / Cas9 vector by knock-in using the CRISPR / Cas9 gene editing tool. Rosa26 is ubiquitously expressed in embryonic and adult tissues. The knock-in results were confirmed by PCR > and sequencing. The transgenic fibroblasts thus obtained were infected with the CSF virus. In the cell cultures an antiviral activity could then be detected by qPCR >.
The cells were used to produce transgenic porcine embryos in the next step. These were implanted into sows. In this way 12 female, fully developed and viable piglets could be produced, in which the antiviral RNA could be detected by qPCR.

The F1 generation was produced with non-transgenic semen. Some of these offspring had the genome for CSF resistance. The genetic modification had been stably inherited.
Finally, both the transgenic pigs and a control group were infected with the CSF virus. All non-transgenic pigs died acutely. The genetically modified pigs showed only weak symptoms and the virus levels in the blood were significantly lower.
Resistance could significantly reduce the high economic losses. In the opinion of the authors, this model of genetic modification could also be applicable to other viral diseases and animal species. First, however, long-term studies must be undertaken, for example, whether resistance is permanently maintained and whether there are other effects of genetic modification.