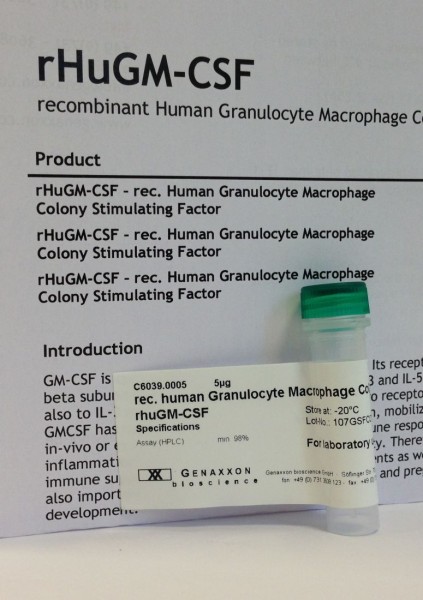 Human GM-CSF produced in E.Coli is a single, non-glycosylated, polypeptide chain of 127 amino acids and a molecular mass of 14,477 Dalton. The ED50 as determined by the dose-dependant stimulation of the proliferation of human TF-1 cells (human erythroleukemic indicator cell line) is 0.1ng/mL, corresponding to a specific activity of 11 x 10E6 IU/mg.

GM-CSF is a cytokine that controls the production, differentiation, and function of granulocytes and macrophages. The active form of the protein is found extracellularly as a homodimer. This gene has been localized to a cluster of related genes at chromosome region 5q31, which is known to be associated with interstitial deletions in the 5q- syndrome and acute myelogenous leukemia. Other genes in the cluster include those encoding interleukins IL-4 >, IL-5 >, and IL-13 >. GM-CSF stimulates the growth and differentiation of hematopoietic precursor cells from various lineages, including granulocytes, macrophages, eosinophils and erythrocytes.