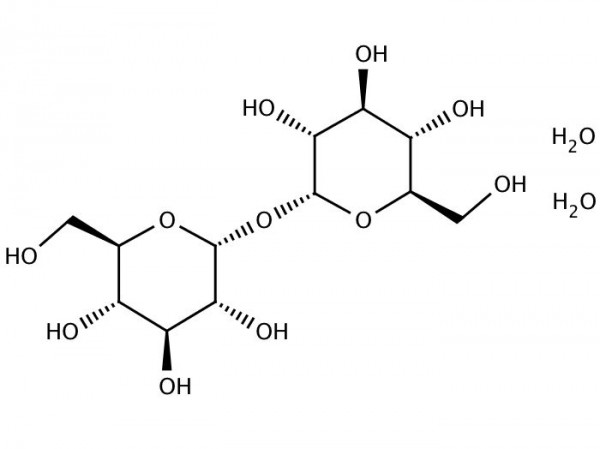 Trehalose, also known as mycose or strong>tremalose, is a natural alpha-linked disaccharide formed by an alpha,alpha(1,1) glucoside bond between two alpha-glucose units. It can be synthesised by bacteria, fungi, plants, and invertebrate animals. It is implicated in anhydrobiosis the ability of plants and animals to withstand prolonged periods of desiccation. It has high water retention capabilities, and is used in food and cosmetics. The sugar is thought to form a gel phase as cells dehydrate, which prevents disruption of internal cellorganelles, by effectively splinting them in position. Rehydration then allows normal cellular activity to be resumed without the major, lethal damage that would normally follow a dehydration/rehydration cycle. Trehalose itself is not an antioxidant because it is a non-reducing sugar and does not contain nucleophilic groups in its molecule. However, it was reported to have antioxidant effects.

Trehalose is a nonreducing sugar formed from two glucose units joined by a 1-1 alpha bond, giving it the name of alpha-D-glucopyranosyl-(1 - 1)-alpha-D-glucopyranoside. The bonding makes trehalose very resistant to acid hydrolysis, and therefore is stable in solution at high temperatures, even under acidic conditions. The bonding also keeps nonreducing sugars in closed-ring form, such that the aldehyde or ketone end groups do not bind to the lysine or arginine residues of proteins (a process called glycation). Trehalose is less soluble than sucrose, except at high temperatures >80°C. Trehalose forms a rhomboid crystal as the dihydrate, and has 90% of the calorific content of sucrose in that form. Anhydrous forms of trehalose readily regain moisture to form the dihydrate. Anhydrous forms of trehalose can show interesting physical properties when heat-treated.

Trehalose aqueous solutions show a concentration dependent clustering tendency. Owing to their ability to form hydrogen bonds between one another, they self-associate in water to form clusters of various sizes. All-atom molecular dynamics simulations have shown that when reaching a concentration of 1.5-2.2 molar, the trehalose molecular clusters percolate and form large, continuous aggregates within the system. Source: Wikipedia (https://en.wikipedia.org/wiki/Trehalose)