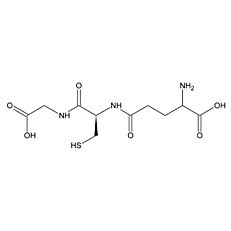 Glutathione reduced ethyl ester has been shown to be much more easily transported into isolated rat hepatocytes than glutathione. Within the cells it could be converted into reduced glutathione. Therefore it could - better than glutathione - prevent immunsystem reactions. GSH-OEt is a protective agent against cellular damage, such as cataracts and mitochondrial degeneration. It undergoes hydrolysis by intracellular esterases thereby increasing intracellular GSH concentration in many tissues and cell types. Glutathione monoethyl ester may be used to supplement cellular pools of GSH in vitro and in vivo and can prevent ROS formation, neutralize toxic products and block apoptosis pathway. The effect of glutathione (GSH) and glutathione ethyl ester (GSH-OEt) supplementation on GSH homeostasis and exercise-induced oxidative stress was also examined. Glutathione ethyl ester protects against cisplatin-induced ototoxicity in the rat.