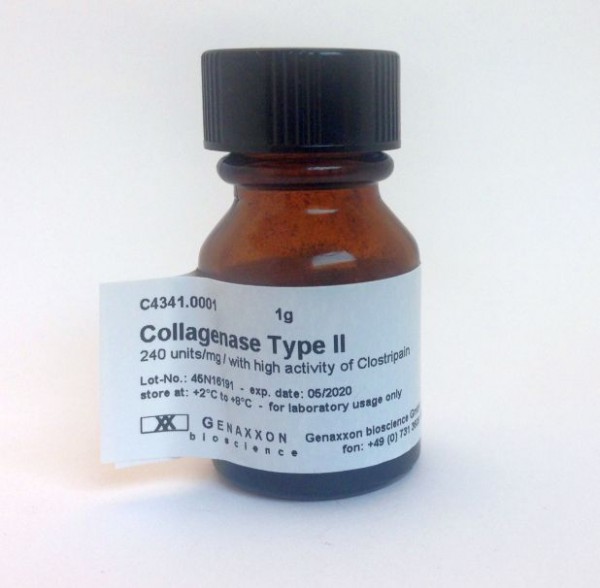 Clostridium histolyticum collagenase is an enzyme mixture of collagenase, clostripain and tryptic and proteolytic activities. Type II Collagenase is recommended for the preparation of cells from liver, bone, thyroid gland, heart and salivary gland and has a specific activity of >180 Mandl units per mg of dry matter.

Collagenase is produced by two separate and distinct genes in Clostridium histolyticum. Both genes have been cloned and sequenced (Yoshihara 1994). The colG gene codes for type I collagenase, a 936 amino acid protein, while the colH gene codes for type II collagenase, a 1021 amino acid protein. Both genes share 72% identity, the proteins only 43%. Both gene products can be present as two or more isoforms differing in molecular weight. Therefore collagenase mixtures can contain six to eight different proteins in a molecular weight range from 68 to 130 kDa. Substrate
specificity studies have demonstrated that the colG gene prefers natural substrates such as intact collagen, compared to the colH gene product which preferentially digests short synthetic substrates (FALGPA) (Eckhard et al. 2009 and Matsushita 1999).

General description:
The treatment of tissue with collagenase causes the careful, selective degradation of the intercellular matrix, and does not affect the growth of the cells. The collagenase offered by Genaxxon bioscience is a mixture of different proteolytically active enzymes and requires calcium ions for both the catalytic activity and the binding to the collagen molecule. In contrast to vertebrate collagenase, Clostridium histolyticum collagenase digests native triple helix collagen into small peptides, which is the major use of collagenases in cell culture application.

Lyphilised Collagenase should be stored at +2°C to +8°C and remain stable without loss of activity for at least three years. Enzyme should be protected from moisture. Dissolved Collagenase can be aliquoted and stored at -20°C for one year.

High Clostripain activity while showing a tryptic activity that is comparable with that of Collagenase Type I.

Specifications:
Specific activity: >180 units/mg dry weight.
High Clostripain activity
The tryptic activity that is comparable with that of Collagenase Type I

Recommended for cell preparation from epithelial and lung tissue, tissue of the suprarenal gland and adipose tissue.