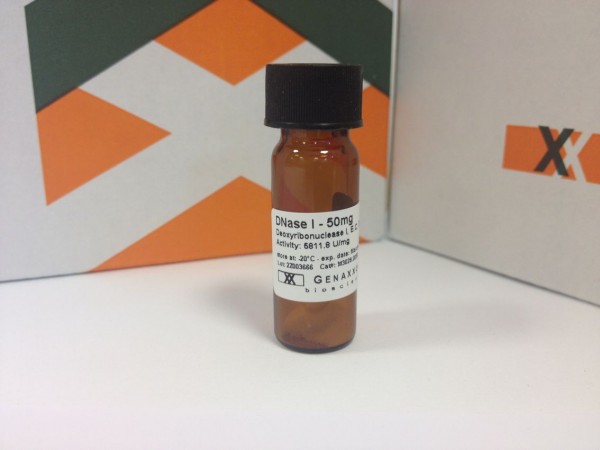 DNase I is an endonuclease isolated from bovine pancreas that digests double- and single-stranded DNA into oligo- and mono-nucleotides.

DNAse I is used, among other things, to avoid unwanted cell clumping during tissue disaggregation, which makes dispersion of individual cells difficult. Since tissue disaggregation and subsequent isolation of single cells is always accompanied by rupture and lysis of some cells, DNA is released from these cells into the surrounding medium. The released DNA in the medium is thought to be responsible for undesirable cell clumping during tissue dissociation procedures. This clumping effect can be avoided by adding deoxyribonuclease (DNase) to the dissociation medium and has been described for a variety of different cell and tissue types.

DNase I is suitable for eliminating DNA from RNA preparations prior to sensitive applications, such as RT-PCR. Since no RNA purification procedure removes 100% of the DNA, RNA samples should be digested with DNase I before RT-PCR. A simple 15 minute digestion at room temperature removes the contaminating DNA. DNase I is inactivated by adding the stop solution and heating. Heating also denatures the RNA, so the RNA can be used directly for reverse transcription.

This DNAse I is not RNase-free and has to be chemically treated if used for RNA isolation procedures.