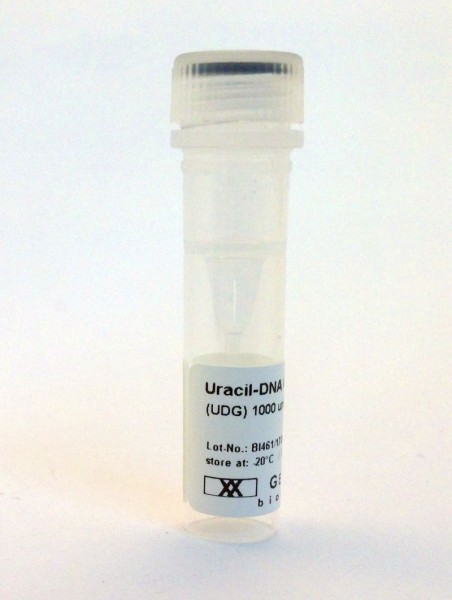 Uracil DNA Glycosylase (UDG), also called uracil N-glycosylase (UNG), catalyzes the release of uracil from uracil-containing DNA. The UDG/UNG from Genaxxon is a highly purified, recombinant enzyme isolated from E. coli with a mass of 26 kDa. UDG efficiently hydrolyzes single- and double-stranded DNA containing uracil, except for oligomers with 6 or fewer bases. Therefore, uracil-DNA glycosylase (UDG) is used wherever it is necessary to avoid the risk of DNA carryover (contamination) during PCR.

In order to be able to hydrolyze DNA by UDG/UNG you do need dUTP > in your PCR reactions.

for prevention of carry over of DNA in PCR

One unit of activity is defined as the amount of enzyme required to release 60 pmol of uracil per minute from double-stranded, uracil containing DNA.