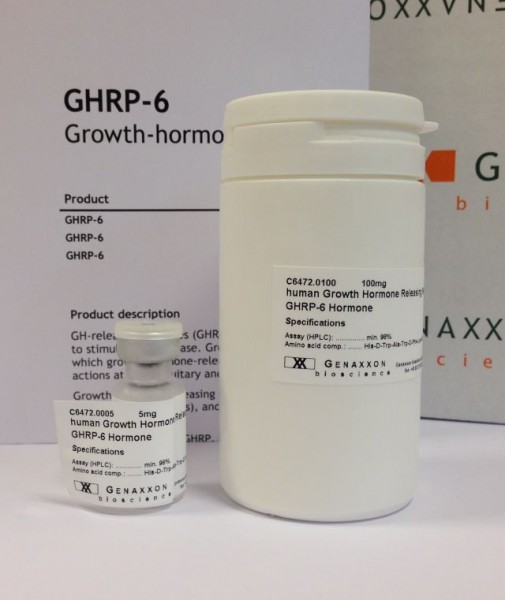 [D-Lys3]-GHRP6 (growth hormone releasing peptide 6) induces the secretion of growth hormone (GH). In the membrane of clonal GC somatotropes, this peptide elevates the number of functional voltage-gated Ca2+ and Na+ channels. Chronic treatment with this peptide causes an elevation in Na+ macroscopic current in bovine pituitary somatotropes in culture, which results in an increase in the release of GH.

GH-releasing peptides (GHRPs) are synthetic peptides that like GHRH act directly on pituitary somatotrophs to stimulate GH release. Growth hormone (GH) release is stimulated by a variety of synthetic secretagogues, of which growth hormone-releasing hexapeptide (GHRP-6) has been most thoroughly studied, it is thought to have actions at both pituitary and hypothalamic site.

D-Lys3]-GHRP6 has been used • to treat bovine somatotropes to determine the release of GH from treated cells and non-treated or control cells. • for intraperitoneal injection to groups of broiler chicken to determine the effect on feed intake, weight gain